“The Queen’s Gambit”: The Thrilling Story Of A Chess Prodigy 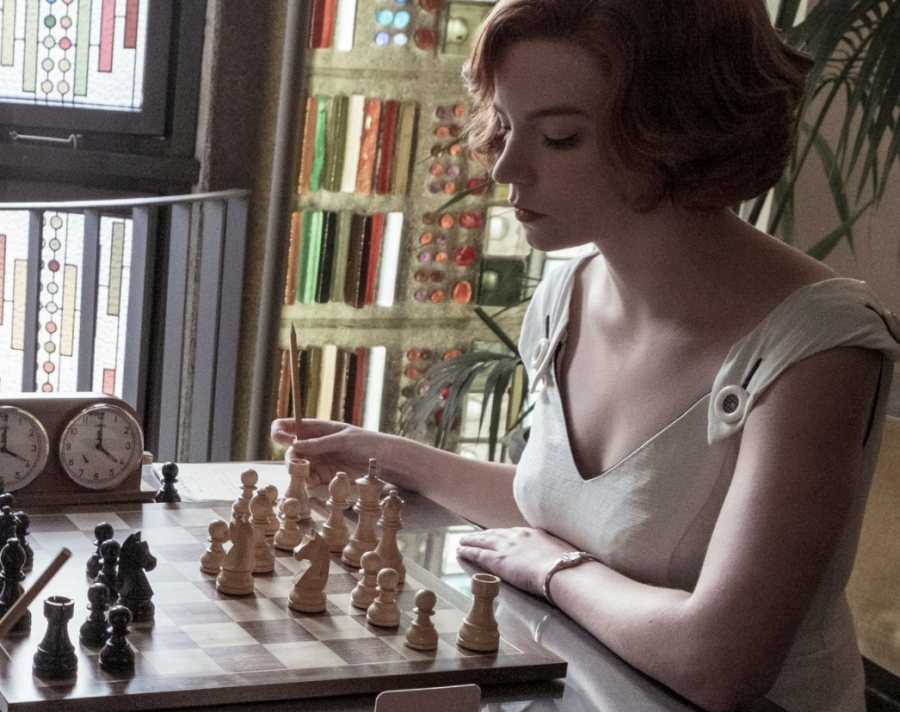 As perhaps one of the most unexpected hit TV series, “The Queen’s Gambit” soars to the top of the charts at a staggering 62 million views and counting. The seven-part limited series tells the story of an orphaned girl who discovers her aptitude for chess at just nine years old and grows from a child prodigy to a world-renowned player.

The idea was originally turned down by nine production companies who claimed no one would be interested in a show about chess. They would soon be proven wrong, as the series was just named Netflix’s most watched scripted limited series to date just one month after its release in October. It is rare to see this success in a TV show, especially after such a short period of time, and it has fans and critics alike asking: what about the show is so enthralling?

Based in 1960s Kentucky, the show follows the rather dismal life of a young girl, Elizabeth “Beth” Harmon, who, at just nine years old, was orphaned after surviving a car crash fatal to her mother. She is taken to live at the Methuen Orphanage: the typical unpleasant, mundane orphanage everyone imagines one to be. Here, she befriends but one girl, Jolene, a boisterous, troublesome, yet caring nonetheless orphan.

Aside from her one companion, Beth’s life at the orphanage is wearisome. The “vitamins” (really tranquilizers) the orphanage requires all girls to take have become a lifeline to her; before reaching her teen years, she has become addicted to drugs. This is just the beginning of the battle she will continue to fight as she grows more and more dependent on substances.

As no classes challenge her and no offered activities interest her, Beth is desperate to find any hobby to keep herself occupied. She soon discovers chess and quickly develops an affinity for the game. Such talent at Beth’s age is practically unheard of, and word quickly spreads throughout the local chess community. Thanks to her mentor, the orphanage’s janitor, the local high school’s chess coach came to scout her talent, and after falling short to a nine year old, he was, as one might imagine, thoroughly impressed by her gift for the complicated game. He invites her to come play the high school team, thus indicating the start of her career.

The show progresses from her childhood to her adoption to eventually her global involvement in chess. It explores her character development from a young girl to a young lady, touching on her personal struggles, family troubles, and friendships throughout. Despite her unconventional talent that makes her a world star, she is still confronted with the everyday teenage girl drama and combatting feelings for others. We watch how her life revolves around the 64 checkered tiles, the pills, and the bottles as her chess career and personal life progress.

The story of the troubled chess prodigy’s successes and failures provides the perfect combination of competition, drama, and unconventionality, thus explaining the reason for its instant success. “The Queen’s Gambit’s” captivating plot and execution appeal to all audiences, making it the perfect quarantine binge.